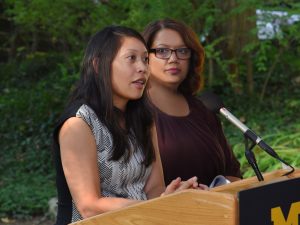 Bernice Yeung arrived as a Knight-Wallace Fellow in 2015, following an intense period of collaborative reporting that produced two award-winning investigations, Rape in the Fields and Rape on the Night Shift. Since the Fellowship, she has published a book, “In a Day’s Work: The Fight to End Sexual Violence Against America’s Most Vulnerable Workers.” Bernice returned to Wallace House in September to give the 33rd annual Graham Hovey Lecture. Prior to the lecture, Lynette and Bernice had a conversation discussing the relevance of her reporting in the context of the #MeToo Movement.

Clemetson: You first started writing about sexual abuse of low-wage workers in 2012. How do you view the cultural change in our recognition of and conversation around the issue?

Yeung: There has been a complete transformation of the public dialogue. When we started in 2012, the campus sexual assault conversation was ongoing and robust. Simultaneously, the military sexual assault investigations were happening. There was a slow drumbeat of looking at sexual violence in different corners of society. But now, post-#MeToo, it is part of the daily headlines. The conversation is almost inescapable. There is a completely different resonance now.

Clemetson: And yet, much of the current conversation is around prominent figures. Do you think that the people that you focused on are being represented enough?

Yeung: There is a part of the movement that is about understanding the prevalence of sexual violence. And then there is a fascination with the comeuppance aspect of the story, an interest in famous people and the fall of power. I think more attention ought to be paid to those who are less powerful in terms of their professional and financial positions.

I recently reported a story where I talked to women truck drivers, public health workers, government workers, and hospital techs. They were excited to see the way #MeToo has opened up a space to have these conversations. But a lot of them still wonder whether that opening has reached them yet. They were impressed by the famous women who had come forward, amazed and grateful that they had spoken up, but they also really wondered why when they themselves had spoken up, why they weren’t heard in the same way.

Clemetson: What drew you to this particular corner of the issue?

Yeung: There was an element of it that I was inclined to be curious about because of my own family’s immigrant background to the United States. I had done some stories on domestic violence and immigrant women and had seen the holes and gaps in policy and law when it comes to assisting immigrant women, and how seeking any kind of recourse or help was so formidable for those women.

Clemetson: How did approaching the issue for a book lead you to new insights?

Yeung: We tend to think of sexual harassment as a problem between two individuals, as a behavioral problem by a bad apple. The book helped me look at policies, how companies operate, how industries function and how they create environments that make certain workers more vulnerable. So much of our labor law enforcement is predicated on the worker making a complaint. And when you have a population who are low wage, immigrant, perhaps with tenuous immigration status, living on the edge of poverty, expecting them to come forward is not realistic. We don’t have a realistic way for them to engage with the resources that would enable them to put an end to labor abuses.

Clemetson: There seems to be a greater appetite and more space now across platforms for journalism that explores issues systemically.

Yeung: Yes. I am lucky be a journalist in this moment where there is space for investigative journalism about systemic issues. I have always been interested in melding sociological strategies with journalism. My study plan was looking at how social science research strategies could be applied to journalism. I think there is something about what sociology provides, a systems-based orientation, plus an attempt to quantify, along with qualitative human interviews, that makes sociology a kindred spirit to journalism.

Clemetson: How did the fellowship inform how you approached the book?

Yeung: I don’t think I would be the same journalist I am now if I had not done the fellowship. I don’t think my book would exist. The mental and emotional space that the fellowship provided made it possible to do this book. I was coming off several years of looking at this issue when I arrived, and the mental fatigue was real. It was really important to give myself some time to stop, regroup and fortify myself so I could job back into it.

And there were so many resources at the university that I drew from. For instance, Catherine MacKinnon in the University of Michigan Law School, is THE person, THE scholar, who defined what sexual harassment is. Having the opportunity to learn from her and others like her left me astonished. What I was able to bring to the book in terms of a contextual and systemic look, that was possible because of the time I had at the university.

Clemetson: As this issue has exploded, it has also caused turmoil in many news organizations.

Yeung: I have been so heartened and impressed by the incredible reporting that has been done by the dogged and sensitive journalists working on this issue, the amount of vetting and checking, and deep research and reporting. I don’t know if the general public appreciates how serious and rigorous the reporters have been on these stories. And then you have journalists who are raising this issue, even as they are having to report on their own organizations and call into question the authority of their own employers. I just have so much respect for the work that is being done, and I appreciate those who are doing the work.

Clemetson: Do you feel that we truly are in a moment of change, a substantive shift?

Yeung: I see parallels to the Anita Hill/Clarence Thomas moment. I am sure we’ll look back on #MeToo and see it as a watershed moment and a shift in the cultural consciousness. But I think the question is, now what? There is work being done around prevention and solutions, and those are harder stories to cover. As reporters, we want things to be concrete and evidence-based, something we can measure. The slow culture change that seems critical to shifting the way we deal with sexual harassment is harder to document. But I think that is where we need to be paying more attention now.

Clemetson: So you intend to keep going.

Yeung: As much as I can, yes. I intend to. I am in that space now where I want to know that it is all going to lead to something, some tangible example of change. I am definitely watching and tracking. It is important to tell those stories about how change can happen, how reform can happen.