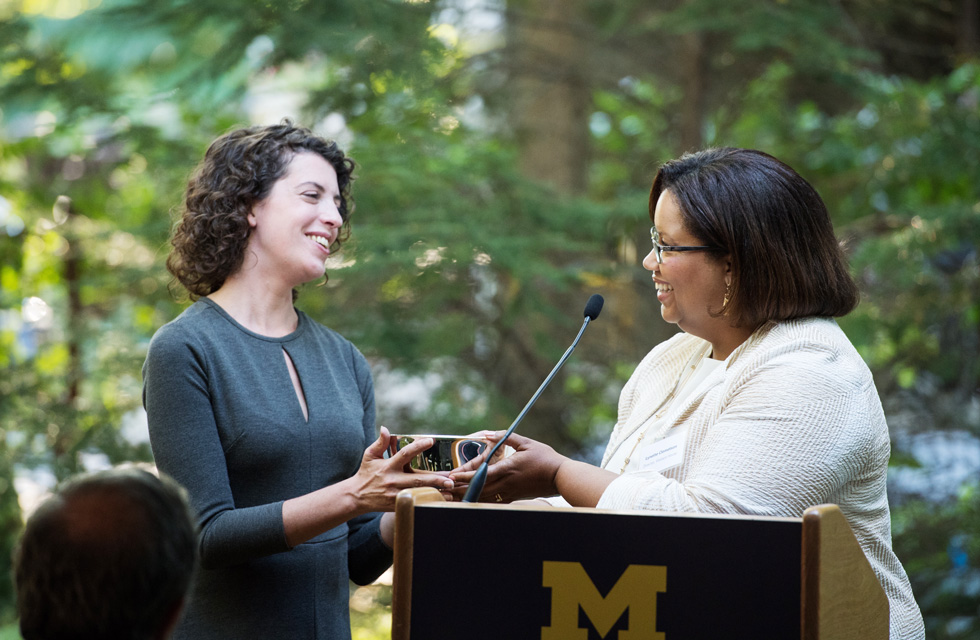 Molly Ball ’10, has emerged as one of the most prominent political reporters of the 2016 election season. As a staff writer for The Atlantic, her unsparing analysis of the campaigns, keen observations of society and dry wit have made her a must-read for political junkies. They’ve also made her a favorite of cable news programs and Sunday morning political shows. In addition to following her richly textured stories from around the country and her quick takes on the news of the day, Ball’s tens of thousands of social media followers also delight in her frequent selfie posts, where she makes fun of her glamorous TV makeup then notes that it is time, once again, to “Face the Nation.”
And yet, Ball didn’t grow up watching “Face the Nation,” or any of the other political shows on which she is now a regular. Her family didn’t own a TV.

I asked her about that, as well as a few other things, when she visited Wallace House in September to deliver the 31st annual Graham Hovey Lecture. Her topic, of course: Election 2016 – The Great Disruption of American Politics.

Lynette Clemetson: Many people feel they are getting to know you this election cycle through your television appearances, as much as through your writing. And yet you have a very distant relationship with TV. What’s the importance of television for you as a journalist?

Molly Ball: My parents are retired college professors. My mother felt very strongly that television rots children’s brains. So I was the freak in school who didn’t know what any of the television shows were. The downside of that is that to this day I am culturally illiterate. I’ve never seen an episode of “Happy Days” or “Saved by the Bell.” But the upside is that my consciousness of stories and of narrative was formed by reading books.

Television is not my job. I don’t get paid for it. I just want to have interesting conversations with people. I’m just trying to get my head around what’s happening in this country. America is a puzzle that I’m always trying to solve. I do that by flying around the country and talking to people and seeing things happen, by being a witness to events and then trying to tell that story to other people in a way that makes them think or sheds light on things. The medium really doesn’t matter when that’s what you’re trying to achieve. It can be Twitter, it can be TheAtlantic.com, it can be “Meet the Press” or it can be an article in a print magazine. Which does still exist.

Clemetson: Speaking of print, you have different audiences with different habits there, too. Do you approach the print and digital versions of The Atlantic differently?

Ball: I think I write in the same voice in both publications. What I love about The Atlantic is that since it was founded in the 1850s, it’s been the magazine of the American idea. I like stories that are about ideas, not just about personalities or events. Not “This happened and that happened,” but “What does it mean? Why is it happening? What’s the context, the history, and what does it tell us about the bigger picture?”

Inside The Atlantic, we refer to things as “Atlantic-y.” You know it when you see it. It’s that combination of smart and fun, high and low, in a way that is both enlightening and shareable, which has the great virtue of working really well in our current online marketplace. It doesn’t matter if the thing is a listicle or a photo meme or a 300-word blog post or a 3,000-word story. It’s just about having that sensibility.

Clemetson: How did the Knight-Wallace Fellowship help shape your career?

Ball: The fellowship changed my life. I was stuck. Stuck in a newspaper business that no longer had any sort of upward mobility, at least not for me. I had been banging my head against the wall trying to move up for so long. I thought maybe I should take the hint the world was trying to give me and just get out of journalism altogether, which would have been both heartbreaking and difficult, since I didn’t know how to do anything else. This has been the only thing I knew how to do since I was 12 years old and started a newspaper in my neighborhood in Colorado.

The journalism business had been saying no to me for years and years. And suddenly, at Wallace House, I was in this place where the answer to everything was yes. And it absolutely restored my soul and showed me there was a path forward in journalism.

Clemetson: Was that path immediately clear for you?

My husband and I moved to Washington, D.C., in June 2010 with no jobs, an infant, and a small amount of savings. Politico hired me in late September. I was dying to cover the midterms because I knew the Harry Reid race backwards and forwards. The Atlantic hired me a year later.

Clemetson: Has this election cycle revealed anything to you about yourself as a writer, and as an observer of people?

Ball: There have been times in this campaign when I’ve actually felt that my reporting skills were atrophying because to write an amazing story about what’s happening right now in American politics you don’t need any kind of clever angle. All you have to do is point and go, “Holy crap, look at this.” But it’s a great story. And I feel like I’m learning a lot about America – not all of it happy. Those are the best stories, the ones that make you rethink your assumptions and question all you thought you knew about how this thing works. And having the tools and the confidence and the support to just go out and tell the story the way it needs to be told is an incredible privilege at a time like this.

Ball: I’m more excited about journalism than I’ve been in a long time because the election is such a great story. There’s so much texture to it. There will be so many aftershocks. There are so many strands to pull out and explore. And they are going to last for so long after this election.

Four years ago, I was trying to find interesting angles on Mitt Romney, which was sometimes a challenge. I was looking ahead to the rest of my career, thinking, “Am I just going to be writing the same stories every four years until I die?”

But no, because it turns out this thing is always changing. And that’s really exciting and cool. The story most people want to read about an election is who’s going to win. But most of the time that’s the least interesting story. The more interesting story is what is happening out there in America. Who are these voters? What are they thinking? What does it reveal about our national character and society? And the extent of the disruption in this campaign makes me think that we are really at a turning point in American political history, and I don’t think any of us know where it’s going to end.