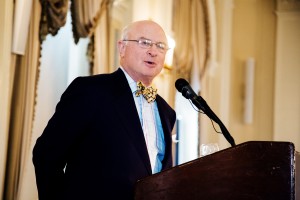 On June 8, 2016, Livingston judge Ken Auletta of The New Yorker presented the Richard M. Clurman Award to Charles Eisendrath for his dedication to mentoring young journalists.

Eisendrath was a 27-year-old new hire at Time when he first met Richard M. Clurman, then chief of correspondents and head of the Time-Life News Service.

“We’re going to pay you four times what you’re making now,” Clurman told him. “When we assign you a story you’re going to get everything you need. If it’s a language or some subject, learn it and send me the bill. If you need a plane or a boat, charter it. Your story will be the best account in the world of that particular event … or we will all know whose problem that is. Won’t we, Mr. Eisendrath?

Clurman’s generosity, frankness and demand for excellence shaped and informed Eisendrath’s “anything-is-possible” style, so it is fitting that 46 years later, after mentoring hundreds of journalists as director of the Knight-Wallace Journalism Fellows that Eisendrath is the recipient of the 2016 Clurman Award, named in honor of his own mentor.

Eisendrath became a Michigan Journalism Fellow in 1974 and stayed to join the University faculty. He went on to direct the University of Michigan’s master’s degree program in journalism in 1980. A year later, Clurman asked Eisendrath to design and direct the Livingston Awards.

In 1986, Eisendrath became the third director of the Michigan Journalism Fellowships and transformed a financially strapped sabbatical program for journalists into the prestigious, globetrotting Knight-Wallace Fellowships and built a $60 million endowment.

As director, Eisendrath adapted Clurman’s carrot-and-stick approach. “It worked wonders with many of the journalism fellows,” he says. “Instead of stories, their assignment was to grow. What might that mean? They would get the time and the money to figure it out with the resources of a great university. Need something special? Ask.”

For three decades, Eisendrath shared liberal amounts of sage counsel, networking opportunities and, perhaps most importantly, a daily demonstration of his own personification of joie de vivre to Livingston Award winners and Knight-Wallace Fellows.

“Over those years, he has given me a lot of advice – and almost all of it good!” says New York Times editor John Broder, once a student of Eisendrath’s at Michigan “When I was a 24-year-old photojournalist, he urged me to switch from photography to writing and editing.”

Michele Norris, former host of NPR’s “All Things Considered,” encountered Eisendrath’s mentoring after winning a Livingston Award in 1990, while she was a suburban reporter at The Washington Post.

“For almost 30 years, Charles has been an angel on my shoulder providing encouragement, advice, critiques and connections to an ever-widening circle of wonderful people.  He treats his posse like a big family.”

“He made clear the expectation that we make the most of this incredible gift,” recalls Michael Vitez, KWF ’95 who came to Michigan as a reporter for the Philadelphia Inquirer. “I don’t think it was a coincidence I won the Pulitzer a year after my fellowship with Charles.”

He is, as KWF board member Jill Abramson notes, an optimist, one of the few prominent veteran voices in the journalism world who shrugged off the doom and gloom. “That’s what makes him such an inspiration to young journalists,” she says.