The Livingston Awards for Young Journalists and the University of Michigan announce the 2016 finalists in local, national and international reporting. The finalists, who represent the top ten percent of entries received, will move to the final round of judging. The awards honor the best professionals under the age of 35 in traditional and new forms of journalism. 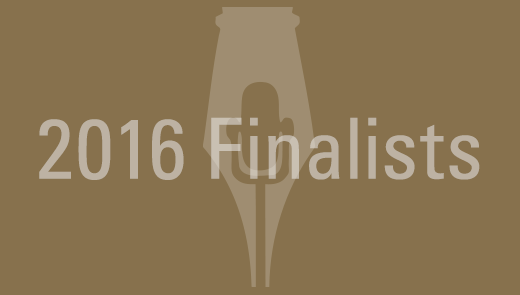 Funded by the John S. and James L. Knight Foundation and the University of Michigan to support a new emphasis on digital media efforts, the program continues to see an increase in digital submissions, with a 20 percent increase in digital entries over last year. Since the funding initiative began three years ago, digital entries increased 170 percent and overall entries increased 65 percent.

“Being named a finalist signifies high achievement and the promise of more and even better things to come,” said Charles Eisendrath, Livingston Awards founding director. “Each year, the judging process begins with a reading out of the names, titles and subjects of this fine work. Then follows a discussion among the judges that I consider the best seminar of the year about the ingredients of great journalism, no matter in which branch of the media.”

The national judges will introduce the winners on June 8, 2016, at a New York City luncheon.

Following are the 2016 finalists.

About The Livingston Awards:

The Livingston Awards for Young Journalists are the most prestigious honor for professional journalists under the age of 35 and are the largest all-media, general reporting prizes in American journalism. Entries from print, broadcast and online journalism are judged against one another as technology blurs distinctions between branches of the traditional platforms. The $10,000 prizes, awarded annually for local, national and international reporting, are sponsored by the University of Michigan, the John S. and James L. Knight Foundation and the Indian Trail Charitable Foundation. The Livingston Awards are administered by Wallace House at the University of Michigan, home to the Knight-Wallace Fellowships for Journalists. Learn more at wallacehouse.umich.edu/Livingston-awards.

About the John S. and James L. Knight Foundation: