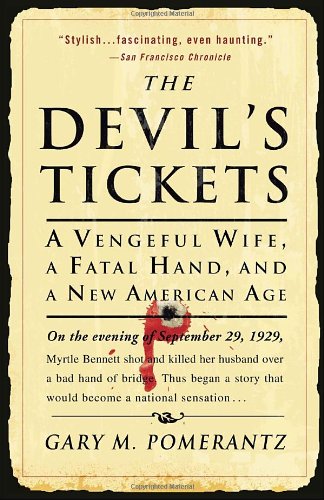 Throughout the Roaring 20’s and the Depression the card game of bridge was all the rage. The Barnum of the bridge craze was a spotlessly-manicured, tuxedoed Russian named Ely Culbertson, who used mystique, brilliance and a certain madness to position the game as a challenge to women, a dare, really. If a woman sought true equality, Culbertson suggested, she only had to buy a deck of cards – and, of course, Culbertson’s books of bridge instruction. But many husbands weren’t ready to follow their wives’ lead. In a flashpoint of the craze, in September 1929, in Kansas City, a husband and wife bridge spat boiled over, and Myrtle Bennett shot her husband Jack dead. Her murder trial was a sensation set against the backdrop of a raucous decade in which women were achieving new voice. Her attorney was the most famous man in Kansas City, former U.S. Senator James A. Reed, a one-time Democratic presidential candidate who yet had his eyes on the 1932 nomination. For Myrtle, Reed put on a dramatic show of courtroom logic, eloquence and a few tears. Watching from New York, Culbertson offered trial commentary and used the Bennett’s story to sell bridge, his instructional books and himself. Housewives adored Culbertson, and rushed to hear his lectures. Months after the 1931 trial, when Culbertson and his glamorous wife Josephine won the Bridge Battle of the Century at the Waldorf Astoria in the glitter of New York high society and Hollywood newsreels, they became millionaire icons.