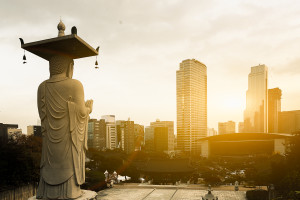 The Knight-Wallace Fellows will travel to Asia for the first time since expanding our international news tours beyond North America in 2000. On December 10, our Fellows will board a flight to Seoul. They will gather knowledge of politics, economics and the present situation in South Korea, while also learning about culture and history.

Wallace House Director Lynette Clemetson ‘10, who worked as a foreign correspondent in Hong Kong, is pleased to take the class to Korea. “Exploring journalism, politics and culture in other parts of the world is a cornerstone of the Knight-Wallace Fellowships. I am thrilled to be expanding the program’s travel into Asia. Wallace House has welcomed so many talented journalists from South Korea to Ann Arbor over the years. How wonderful that we can now take our Fellows to Seoul to connect with our accomplished alumni network there.”

Ten classes of Fellows visited Turkey under the leadership of KWF Board Member Ferhat Boratav, editor-in-chief of CNN Turk. We were planning to go to Istanbul again this December when a new travel warning was issued in early November: The State Department ordered the departure of family members of employees posted to the U.S. Consulate General in Istanbul “based on security information indicating extremist groups [were] continuing aggressive efforts to attack U.S. citizens in areas of Istanbul where they reside or frequent.” With a heavy heart and thinking of our alumni and friends in Turkey, we decided to cancel our trip.

Clemetson talked about expanding travel to Asia from the first day she arrived in Ann Arbor. But she wasn’t expecting to do it so soon. With only five weeks to departure, a trip to Korea seemed like a difficult adventure to pull off. But after current Fellow Jin Kim helped arrange a conference call with our journalism partners at Seoul’s Press Association, the Kwanhun Club, the proposal turned into a fun and exciting proposition.

We were assured that it would be possible to put together an informative and eye-opening trip for our Fellows on short notice. Kim has been working for the past month as the liaison between our Korean partners and Wallace House. And our alumni in South Korea moved into action right away, too.

“I just moved to Seoul in April for a new adventure covering the peninsula for Stars and Stripes newspaper. I am looking forward to showing KWF ’17 my new country,” said Kim Gamel ‘15, an American foreign correspondent who spent many years in Russia and the Middle East. Gamel immediately started planning our trip to the boarder between the two Koreas and arranged a roundtable with U.S. military stationed in South Korea.

Jaepil Noh, KWF ’16, is working tirelessly behind the scenes to schedule our week in Korea. He is trying to take the week off work to be with us. “I will show our Fellows various aspects of Korea especially focusing on its political situation. The DMZ tour will expose them to the past and the future of Korea. I will take them to historical places so they can better understand the long history of Korea. Just come and enjoy!”

And of course, we are keeping with our news tour traditions of going to places at the most interesting time:
Since changing our plane tickets from Istanbul to Seoul, the protests calling for the Korean President Park Geunhye to resign have grown. In the past, Fellows have experienced protests in Argentina, Brazil and Turkey. They saw the Canadian oil production tank in Alberta.

Now we will arrive in South Korea in the middle of a fascinating political crisis.

“So I plan to take you to the square where Korean people gather on Saturdays to demand that the President steps down,” said Noh. “The demonstrations are peaceful and people are enjoying them as if they were a festival. If you see them, you will see how humorous and witty and great the Korean people are.”

We are curious and excited to discover Korea, and very thankful for all the help our partners and alumni are giving us.

Here’s to new adventures with KWF ’17!