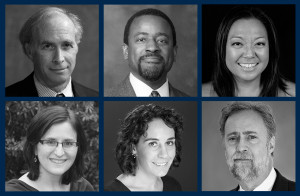 Event is free and open to the public

A panel of national journalists and a political science expert will offer analysis about the presidential election and the tempestuous aftermath during a public discussion at the University of Michigan.

The focus will be on criticism of the media, what journalists, pollsters and political experts missed, and the path forward in covering an unprecedented presidency and divided country.

Lynette Clemetson, director of Wallace House at U-M, said it is important to hear from reporters who have covered the presidential election from the beginning.

“It is even more important to turn our attention to what comes next,” Clemetson said. “We are entering uncharted waters. As much as news organizations need to to examine their coverage priorities, news consumers need to become astute in assessing the flood of information coming at them and the role and function of a free press in society.”

The panel includes alumni of the U-M Knight-Wallace Fellowships for Journalists who covered the campaign and will report on the transition, as well as a former Livingston Awards winner and a U-M expert who follows elections and voting behavior.

● Craig Gilbert is the Milwaukee Journal Sentinel’s Washington bureau chief and author of “The Wisconsin Voter” political blog. He has covered every presidential campaign since 1988 and has written extensively about the electoral battle for the swing states of the industrial Midwest. Gilbert was a 2010 Knight-Wallace Fellow.

● Vincent Hutchings, U-M professor of political science, is an expert on public opinion, elections and voting behavior. He studies demographic change and its effect on voting behavior and how campaign communications are designed to appeal to various group identities.

● Tracy Jan is a national political reporter who covered the campaign for The Boston Globe. She focused primarily on the GOP, including Christian evangelicals, Ted Cruz and Donald Trump. This month, she joins The Washington Post to develop a new beat on the intersection of race and the American economy. Jan was a 2015 Knight-Wallace Fellow.

● Laura Meckler is a staff writer with The Wall Street Journal where she covered the Democratic presidential primary and Hillary Clinton’s campaign. She has reported on presidential politics, the White House, changing American demographics, immigration and health care. In 1999, she received a Livingston Award for national reporting.

● Katie Zezima is a political reporter for The Washington Post where she covered the Obama White House years. She chronicled the campaigns of Kentucky Senator Rand Paul and Texas Senator Ted Cruz from start to finish and before switching to enterprise reporting on social issues riling the election in its final months. Zezima was a 2012 Knight-Wallace Fellow.

Jon Morgan, an editor in the Washington bureau of Bloomberg News since 2010, will serve as moderator. He was a 2001 Knight-Wallace Fellow.

The event is being presented by Wallace House and the College of Literature, Science and the Arts.

Watch video of the event»