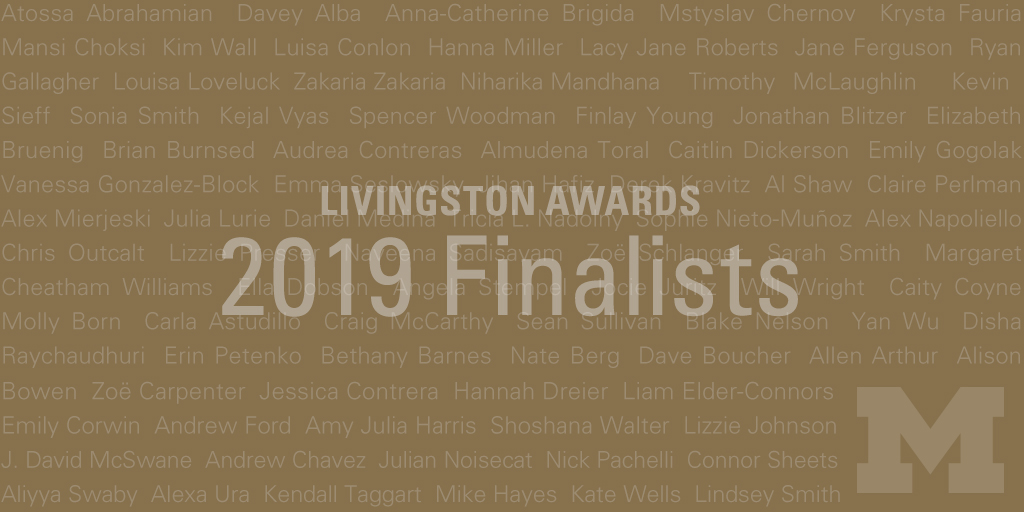 The Livingston Awards for Young Journalists and the University of Michigan announced today the 2019 finalists in local, national and international reporting. The awards honor the best reporting and storytelling by journalists under the age of 35 across all forms of journalism. The 55 finalist selections were chosen from more than 400 entries.

The national judges will introduce the winners on June 4, 2019, at the annual Livingston Awards luncheon in New York City.

Funded by the John S. and James L. Knight Foundation and the University of Michigan to support the vital role of a free and independent press, the awards bolster the work of young reporters, create the next generation of journalism leaders and mentors, and advance civic engagement around powerful storytelling. Other sponsors include the Indian Trail Charitable Foundation, the Mollie Parnis Livingston Foundation, Christiane Amanpour and Dr. Gil Omenn and Martha Darling.

“Each year the Livingston Awards finalists remind us of the essential role journalism plays not simply in documenting facts, but in helping us all to understand, question and experience the complex issues of our times,” said Wallace House Director Lynette Clemetson. “Through excellence in reporting and creativity in storytelling these finalists moved the narrative on stories dominating the headlines and those that were largely unknown.”

Following are the 2019 finalists, for work produced in 2018. Links to their work here.